rowing up in the 70’s, I thought long lines at gas stations were the norm.  Having double-digit home interest rates was the status quo.  The misery index started at 10.57 when Richard Nixon took office in 1969 and climbed steadily to 16.26 by the time Jimmy Carter’s presidency was winding down.  In my world, growing up, each year was expected to be a little worse than the prior one.

To me, this was the norm.

In school, we usually went outside three times a day: morning, lunch and afternoon recess, weather permitting.  When outside, sometimes we’d trip and fall and scrape a knee, bruise an elbow or split a lip.  When playing kick ball, every now and then someone got beaned in the face.  (I know I did once and lost a tooth.  I remember being more upset that I couldn’t find it and was going to be out a dollar when the tooth fairy passed me by.  That’s how it was.  No tooth, no prize.)  And, to add insult to injury, since I wasn’t on base when I got slammed by said ball, I was out — not the kid who threw it.

Which leads me to dodge ball, which was not only a popular game to play at recess, but also was a staple in gym class.  Talk about the potential for red welts on arms, legs and faces!

School nurses were able to apply Bactine and Band-Aids on boo-boos before shooing us back out the door to play a little longer.  If we were in pain, they would pop an aspirin in our mouths first and then send us on our way.  We didn’t care as long as we got to get back outside.

At the end of a grading period, we would all gather around the publicly posted list of student’s names to see if we made the all “A” honor roll and got mad at ourselves if we weren’t on it.  We also got a little concerned about how our parents would react to our name’s being absent from the list.  Talk about stress on a young mind!

Looking back I also realized how unlucky I was when I got that one history teacher labeled, “The toughest one in school!”  I found it odd the following year that the title had been passed to not only my English teacher, but also my Math teacher.  Apparently, there was more than one, “toughest teacher in the school.”  Who knew?  And I was destined to get them all.

I was forced to accept all of this adversity (and more) when I look back in my mind’s eye.  Today’s ultra-hipster was likely spared all of the doldrums and pain of such a miserable and unregulated childhood.

But here’s the odd thing about all of this.  When I look back at my school years, those “hard” teachers were the ones where I learned the most and still remember to this day.  I learned that if I didn’t want to get picked last, I had to actually practice and work harder to compete on the field.  My most emotionally wrenching moments taught me how to avoid the pitfalls the next time around.

How can anyone understand how wonderful an event is if they lack the opposite with which to compare?  Like the ancient yin and yang in oriental philosophy, how do you know light if you do not experience darkness?

Thanks to all of the adversity I experienced in my youth, I had the necessary mental and emotional buffers in place to understand that bad things can happen to anyone at anytime, but so can good things.  There are going to be moments of greatness and moments of overwhelming misery.  There will be periods of drought followed by periods of rain and what feels bad at the moment can turn out to be good later.  The cycles come and go.  Sometimes, the pendulum swings are quick and other times, the arcs are slow and protracted. 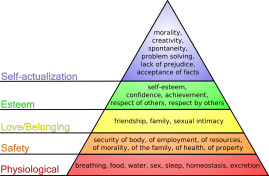 But, I had the ability to keep those experiences in perspective.  I could maintain a level of reason and logic when dealing with stressors, without allowing the emotional urges to take control.  By no means is this to say that emotions are non-existent.  Quite to the contrary, the emotions were always the first to arrive and the hardest to contain.  Humans, by their very nature, are emotional first because stress relegates us to the most primal of instincts — fight or flight.  Maslow’s hierarchy of needs shows that as our needs become more immediate or life-threatening, we are motivated to react to fulfill those needs before all others.  For example, Maslow would say that we cannot reach our full potential if we are cold and starving on the street.  We must address the immediate needs for food and shelter before we can elevate ourselves to more cognitive pursuits.

But, we are not mindlessly trapped in this construct.  The rubric of Maslow’s hierarchy postulates behavior from the perspective of outside forces pressing in on the individual.  As human beings, our minds are capable of reason and thus, we have the ability, if we choose, to see beyond our immediate circumstances.  We don’t have to become thieves, intent on robbing a grocery store to satiate our appetites.  We have the ability to understand that there is a more productive path than to commit a crime.  We are not automatons, forever stuck on predetermined rails, forced to react blindly to outside stimuli.  We have the ability to imagine better circumstances, to be proactive — to see the chess moves four or five ahead of where we are now.

And, much like the game of chess, the more experienced the player, the easier it is to see those moves.

By denying our children moments of adversity, by sheltering them from anything that may hurt them physically or emotionally, we deny them access to fundamental human experiences necessary to give them context to deal with life’s challenges.

If a child has never experienced the emotional let-down of being picked last (or not at all) on the playground, how can we possibly expect them to handle the emotional surges felt the first time they are fired from a job or dumped by someone they love?  If a child isn’t criticized and held accountable for poor grades early in their academic careers, how can we expect them to excel in their work assignments in their actual careers?  How can a young adult be expected to multitask all of the elements of work, family and life when they are never challenged to learn time-management in their early years?  When a child, who grows up with their ego bubble-wrapped by parents who don’t want to hurt their feelings, gets their first poor performance review as an adult, how can we not see that they are ill-equipped to process such an emotionally wrenching experience?  If we don’t allow them to battle through adversity when they are young, what do we expect will happen when they are adults?

We have got to stop thinking that children’s egos are so fragile that we shelter them from the bruising necessary to learn appropriate coping mechanisms for the future.  Like a fledgling baseball player taking their first swings, their hands will likely blister at the repetition of the motion of the bat.  But, over time, those same hands develop protective callouses to prevent that injury.  Any athlete will tell you that they have grown in their sport only by overcoming the challenges placed in front of them — whether it’s playing against superior opponents, trying to match the talents of others on their own team or implementing the demands of the coach.  It’s easy to understand when it comes to excelling in sports, yet we immediately dismiss this knowledge when it comes to providing our children with the tools necessary to excel in life.

In life there are winners and losers, or, maybe better said, winning moments and losing moments.  So, keeping score is a good thing.  Correcting bad spelling is also good.  So is publishing honor roll lists.  Telling a child that poor effort is just that, poor, will do far more to give that child the tools they need to better themselves than to lie to them simply to spare their self-esteem.  If you are truly worried about their self-worth, which is worse: telling them how great they are at baseball, when they aren’t, or, telling them the truth so they learn how to work hard and legitimately improve themselves?

Life is full of adversity.  It cannot be avoided, escaped or ignored.  If we accept this premise, why would we not equip our children, from the earliest age possible, with the tools necessary to not only accept adversity, but also overcome it?

I would argue, the cruel action is to choose to deny them those negative experiences, because all you are doing is delaying the inevitable.  Only, the longer it takes for that adversity to strike, the harder the blow when it eventually lands.

Maybe, by helping them to accept and handle life’s challenges, it will keep them from thinking they need to forever be a dependent of the federal government. 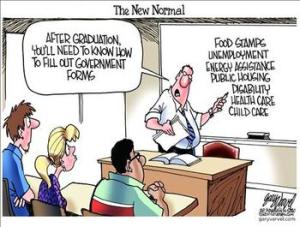 1 thought on “Adversity lessons in youth should be embraced, not avoided”