Fans of the AMC series, The Walking Dead, would find themselves pausing awkwardly when trying to answer this question. For those who have never once seen an episode of the show, we can ask this another way: Do you side with a psychopath who has no concern for his own citizens or do you side with the undead zombies bent on eating alive any remaining humans they find?

Yet another way to understand this comparison would be to reference Joseph Heller’s novel, Catch-22: or, for the Trekkers out there, the Kobayashi Maru — better known as, “The No-Win Scenario.”  Whether you choose to reference Heller’s phrase, which has long since joined the English lexicon; implement the simulation all Starfleet captains must face to prove their mettle in a test designed to always lead to failure; or, stand there befuffled over whether to join forces with the Governor or the undead, the outcome is always the same — you lose.

Syrian president Bashar al-Assad fits easily into the mold of the Governor of Woodbury.  Can anyone argue about his maniacal desire to maintain his position of authority, even at the expense of his own people?  Does anyone deem al-Assad fit for continued leadership or doubt the safety of those around him who would dare to challenge his motives?  His 30-month conventional war shows both his military power and his willingness to use it to remain Syria’s ruler.

In an interview, Bashar al-Assad challenged President Obama to present evidence that the Syrian government, which is engaged in a civil war against various rebel groups, used chemical weapons against civilians in a Damascus suburb on August 21, killing over 1,400 people.  Filtered through the prism of The Walking Dead, this is nearly identical to the Governor asking for Rick (the sheriff and leader of another band of humans struggling to survive) for proof that his people were responsible for an attack on the prison.

Rick (The White House) can claim that soldiers from Woodbury (al-Assad’s military) were responsible for the attack, which violated the fence line (“red line”) and a gentleman’s agreement (international norm) not to use the zombies (chemical weapons) as a method of conflict.  The Governor only has to keep saying it wasn’t him and there’s no evidence proving he ordered any attack to put both parties into a standoff.  This, too, is a no-win situation.  It’s the typical he-said/she-said scenario.

Let’s look at the other side of this paradoxical question.  How do we equate the walkers, the undead zombies bent on eating human flesh, with the rebels attacking the forces of Bashar al-Assad?

A video posted online on Sunday shows Abu Sakkar, the leader of the Syrian rebel group Farouq Brigade, taking a bite out of the heart of a dead Syrian soldier.  Sakkar is shown cutting into the torso of the soldier and saying to his comrades, “I swear to God we will eat your hearts and your livers, you soldiers of Bashar the dog,” Reuters reports.  His companions cheer “Allahu akbar” off screen.

Peter Bouckaert of Human Rights Watch called the videos a disturbing symbol of the changing tide of the Syrian conflict.  “The mutilation of the bodies of enemies is a war crime. But the even more serious issue is the very rapid descent into sectarian rhetoric and violence.”

And, let’s revisit what the soldiers were chanting while watching their commander feasting on the steaming organs of the dead soldier.  His companions cheer “Allahu akbar” off screen.  Where have we heard that before?  Oh, right, from the lips of every terrorist bent on killing anyone who doesn’t believe the way they do.  These are the chants of radical Islam, demonstrated by groups like Al Qaeda, Hezbollah, Hamas and the Muslim Brotherhood.

This begs the question, why would you choose to side with the undead?  Can you honestly see an upside to helping the group that cheers as one of their commanders rips open the chest of a solider of the Syrian army, pulls out his organs and eats them while vowing that God will grant them victory?

Doesn’t this fly in opposition to the testimony a young John Kerry, our current Secretary of State, said about soldiers in the US Army mutilating the bodies of the Vietcong?  Remember when he testified about how vile the soldiers were that would cut the heads and limbs off of their victims, making the case that the US Army was full of monsters and baby-killers, and how could the US Government continue to fund a war effort that would allow for such attrocities, “…reminiscent of Genghis Khan,” to continue?  This same individual is now calling for the United States to side with the people who have done far worse than any of the hyperbole he spun before Congress while on his anti-war crusade.

Yes, Bashar al-Assad’s use of chemical weapons against his own people shows the depravity and evil inherent in his reign.  So, we cannot possibly imagine siding with him or the Syrian army, can we?  This is, assuming, he authorized such an attack.  The fact that chemical weapons were used is, by all account, beyond refute.  What cannot be established with 100% certainty is who gave the order and launched the chemical attack?  But, if not al-Assad, then whom? 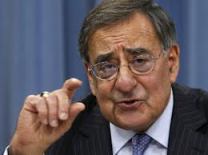 Looking at the walkers, ahh, undead…umm…Al-Qaeda backed rebels, who have shown an utter disdain for the sanctity of human life, is it not possible to imagine such conniving methods used by Al-Qaeda, after hearing President Barack Obama issue his “red line” statement, to launch an attack designed to both frame the regime as well as gain the support of the United States? And, before we eliminate the possible, we need to revisit a statement made just about a year ago by Defense Secretary Leon Panetta:

The U.S. has lost track of some of Syria’s chemical weapons and does not know if any potentially lethal chemicals have fallen into the hands of Syrian rebels or Iranian forces inside the country. There has been intelligence that there have been some moves that have taken place. Where exactly that’s taken place, we don’t know.  The “main sites” in Syria storing chemical weapons with which the Pentagon is most concerned remain secured by the Syrian military. But there is some intelligence that “limited” movements of weapons from other sites have occurred.

Panetta’s statement in September of 2012 followed reports that Syrian rebels claim to have taken control of a military base that contains chemical weapons.

And, though we don’t want to delve too close to the tin-hat society way of thinking, there is enough circumstantial evidence, combined with the history of the tactics of Al-Qaeda, to give rise to the notion that the masters of obfuscation, deceit and propaganda would have no problem gassing innocents in a move to get the might of the US Military to help them in their quest to oust Bashar al-Assad and to take over the government of Syria.

Regardless, do we honestly want to side with the walkers — umm — opposition forces?  Do we proudly clap our arm over the shoulder of people like Abu Sakkar, call him a friend and ally, while asking for a nice Chianti and some fava beans (see “Silence of the Lambs” for context of this reference) to make the cold dish of revenge complete?

There is no way, at this point, to choose a side and not lose.  Siding with a psychotic leader, who has already engaged in a 30 month civil war, leading to the deaths of over 100,000 Syrians and the flight of as many refugees to neighboring countries, would be a foreign policy gaff that makes the Bay of Pigs look like mild tiff between two lovers.  And siding with the opposition army puts us in the position of helping the forces of Al-Qaeda achieve their ends and, perhaps, pulling off the greatest black ops-style disinformation campaign in the history of the modern world and getting egg all over the face of Uncle Sam in the process.

We are facing a Catch-22.  We are partaking in the Kobayshi Maru.  We are trying to decide between the Governor of Woodbury and the walkers.  In any of these examples, there is only one answer.

Choose not to play.

Let’s hope the President and Congress feel the same.

Actor - Writer - Director - Radio - Veteran | I like ‘guy’ things: women, sports, video games, dogs, drinking, football, shooting guns, war movies, action movies, sci-fi movies and playing the hero. I am a red-blooded, American male through-and-through. But, I have another side as well, a deep and entrenched creative side, which started with writing and evolved to include acting and radio. As a result, I have appeared in nearly 100 stage shows and been involved in dozens of motion pictures, including two independent features available on Amazon Prime. I have also been in broadcast radio for over 20 years. Thus far, I have been honored to receive five GAB Awards from the Georgia Association of Broadcasters: Two for Best On-Air Personality and three for Best Talk Show. It was only natural with these pursuits, podcasting would eventually be added to my plate. In late 2017, I decided to start a show with my buddy and co-host, Walt Murray, called, The Wilder Ride. We examine the films of Gene Wilder in the movies by minutes format. This has opened the door to meeting so many new and amazing podcasters from around the world and led to some amazing friendships! As Shakespeare puts it, “I am amazed and know not what to say!” Afterwards, my wife and I started a show called, 'The Marriage Fit Podcast" where we talk about our lives as a blended family. Our tag line is it's a show about trying to make things fit, staying fit, and not throwing a fit. Of all the roles I play, though, I want to point out that there are two I consider more important than any I have ever played (or will ever play) and that is being a DAD and HUSBAND. I have four girls, ages, 26, 24, 23, and 21 and there is nothing I won't do for them. And, none of life's ambitions would be possible without the strength and support of my best friend in the entire world, my wife, Susan. Regardless of anything else, nothing will ever outshine them. View all posts by Alan J. Sanders