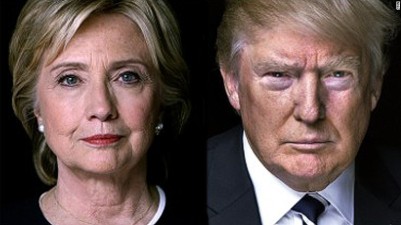 I almost always try to choose my words carefully in any situation. Maybe it’s my background as a writer (both fiction and commentary). Maybe it comes from my many years behind the radio microphone. Perhaps it comes from being a husband to my wonderful wife and father to our four beautiful girls. Or maybe it’s a combination of all of the above, sprinkled with a healthy dose of rationality and reason.

I am not a #Trumpkin. But, I’ve never been #NeverTrump. Throughout the primary season, I was not a fan of Donald Trump. But, I didn’t feel the need to make ultimatums about him, either.

My hope is for everyone to read this article to the end before making up their minds about my reasoning, and I worry the only way to accomplish this is to put all of the aforementioned caveats in place. I’m not trying to alienate either side — at least, not yet.

The art of having a conversation is dying faster than teaching cursive in elementary school. It is becoming lost in the noise of all the hashtag-Never X (#NeverX), where X is someone’s rage du jour. A conversation does not mean you have to agree with the other party. It does not mean they have to change their minds after listening to you. It means each party is granted equal opportunity by the other party to present their thoughts and ideas. It’s an exchange. Each party takes time to listen and digest the words of the other before responding. Maybe common ground can be found. Maybe we agree to disagree. Maybe we learn some new perspective and it helps reform or reshape our own views. Maybe we do the same for someone else.

This has always been the underlying goal of every piece we publish here at Freedom Cocktail. A logical, reasoned conversation in order to educate and learn at the same time. When we shout others down and invent some new-found right in the Constitution of not being exposed to any contrary thoughts or ideas, there is no conversation. And, without the conversation, there is no growth. None.

Over the last 7+ years, the Congress of the United States of America has not functioned as the Founding Fathers intended. Not even close. Our Constitution created a unique form of government based on the principle of three, co-equal branches of government. Not one strong branch, one middle-ground branch and one weak branch. The checks and balances inherent were put in place to make sure all three branches remained separate but equal.

This has not been the case since President Barack Obama took office. The Executive Branch has given us countless examples of presidential overreach — from the gun-running scheme of Eric Holder’s DOJ with Fast and Furious, to the President picking and choosing which laws (or parts of laws) should be followed or ignored, to the IRS targeting conservative organizations and colluding with the DOJ, to the back-door methods of legislating through regulation via the EPA, the FCC, the State Department and more.

Congress, specifically the opposition party, though labeled obstructionist, has been unable or unwilling to stop the Obama agenda since he took office. Without a single Republican vote, Obamacare went sailing through the Congress on the eve of the Christmas holiday. The government (specifically the Executive Branch) now effectively controls 1/6th of the US economy.

In their quest to control or curtail the 2nd Amendment, through multiple executive orders, our President has unilaterally expanded background checks, closed supposed “loopholes” and tightened the process for law-abiding gun owners because, “Congress won’t act!” He has openly admitted he will take pen in hand because the legislative branch of government will not do what he wants.

President Obama is quite shrewd. He always sets the table with a negative before imposing his will, playing the part of the reluctant hero. He will paint the other side with words like, “they have failed to act,” or, “refuse to take action,” or, “continue to ignore the will of the people.” It is then followed by a pronouncement that he will somehow have to find a way to impose his will and make legislation happen without Congress. Hillary Clinton has often applauded this maneuver, stating, “Congress won’t act; we have to do something.” And now she is the presumptive Democrat nominee to become the next Commander in Chief. Why would she not want to have the same authority?

This premise that Congress exists solely to pass the laws demanded by the President flies in the face of how our country was designed to function. Congress is a separate but equal branch of government. Not a lesser branch or a powerless branch. Equal. 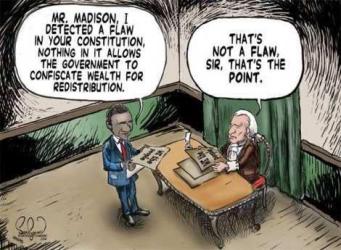 The fact the Legislative branch can stop the agenda of a sitting president is not a flaw in the design — it is intentional. Our Founding Fathers never wanted (nor should we) a king! No matter how much you may want the agenda of one president implemented by executive decree, are you equally willing to accept the same authoritarian form of governance when the opposition is in office?

The logical question to ask is why have legislators allowed themselves to be relegated to mere marionettes, attached by strings to the will of the President and the Executive Office? It’s fear. Fear of being labeled racists. Fear of being derided for opposing his agenda because of a false narrative over skin color. Fear of being mocked and scoffed by the mainstream media for being bigots and obstructionists solely due to the race of the President. As a result, the Republicans in Congress have refused to wield their Constitutional authority to be the check and balance against the will of the President. They have not exercised the powers granted to them to ensure a balanced and stable government, regardless of whom is in office. They have abdicated their role for fear of being painted as racist, bigoted, backward neanderthals, and have set a dangerous precedent, which must be reversed if we are to remain a Constitutional Republic.

Now imagine what this same Congress will do if Hillary Clinton is elected president? All of the same fears will remain because an all too-willing propaganda wing of the Democrat Party, the mainstream media, will just replace the word “racist” with “misogynist” and the word “race” with “sex”. Imagine four (or eight!) more years of a castrated legislative branch. We are already on the cusp of monarchical governance after almost 8 years of the current regime. How much longer can we go before the role of president becomes, for all intents and purposes, an actual monarch?

We need the Legislative branch to start working as designed. We need legislators who revere and follow the Constitution. I know there is a sub-set of the body politic who believe being a “true conservative” means never compromising your principles. There are some who will vote for some third or fourth party candidate so they can feel good about #NeverCaving. If only it were such a black and white case to make.

Can a wall be built if Congress refuses to fund it?

Can executive orders installing backdoor legislative programs be implemented if Congress withholds the tax dollars necessary to make them happen?

Can Supreme Court justices be whisked through and appointed with wanton disregard for their backgrounds if Congress chooses to live by the advice and consent clause?

It should never matter the race, sex, religion, age, sexual identity or preference of anyone in office. Congress should have been doing its job all along, but they have allowed themselves to become irrelevant. It is going to take some time before the Legislature feels comfortable wielding their Constitutional authority again.

If you really want to help this Republic get back to it’s Constitutional roots, we need to get the Legislative branch to stop living in fear. Like it or not, putting Donald Trump in office, a white male, an unprotected class, may be just the shot of chemotherapy this Congress needs to shed the cancer of fear and inaction. It is not going to be pretty. It is going to make us sick. But, it is the only logical choice if you do revere our Constitutional Republic.

5 thoughts on “Maybe Congress will do its job if…”