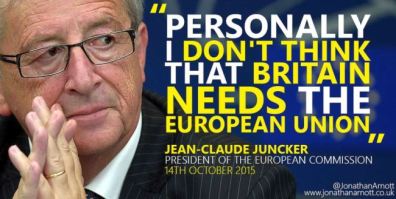 For anyone who has ever come under the auspices of an over-zealous, obnoxious and hindering home owners association (“HOA”), the #Brexit vote will become immediately clear. The vote had nothing to do with wanting to hurt the world economy, deprive economic opportunity to its citizens or bankrupt a nation. On the contrary, it’s the dashed hopes and good intentions of the HOA making such accusations in the face of the UK’s referendum to leave the European Union (“EU”). In some ways, it feels appropriate to see a nation who once believed in the divine right of kings, whose empire stretched around the globe, who then became subjugated under the will of an ever-reaching, untouchable authority, reach the same conclusion we Americans did back in 1776. The #Brexit vote was simply a vote for freedom.

The advent of the home owners association was sold as a way to work together to keep the value of each person’s property growing. Who would not be seduced by the promise of carefree living and recreational amenities for a dollar or two a day? Similarly, the EU was meant to provide a single block of European nations to help maximize trade negotiations with the rest of the world. Every country was going to benefit from the shared power of a single union all working together. Ambrosia was going to flow from the streams while manna would fall from the skies.

Then the HOAs began to slowly morph. The power held by a few could literally impose such controls as approving the only paint colors allowed, mandating mailbox designs, telling residents where to park, how to light their homes, how to landscape or decorate and the list goes on and on. The elitists get to push their world view onto the rest of their fiefdoms and if any dare oppose, those leaders can file actions designed to lead toward the potential annexation and foreclosure of a person’s home. HOAs, instead of benefiting the residents (citizens), have come to benefit municipal governments, builders/developers and the many other sectors who have found a way to feed off of the hapless homeowners (people), such as property managers, legal services, landscape design and maintenance, pool maintenance, CPAs, insurance and banks.

HOAs become a double-tax on the home owner. Not only do residents pay taxes to their local governments (who have shunted their responsibility to maintain sidewalks, lighting, etc. within the subdivision over to the HOA), they also have to pay the annual dues to their HOA to maintain those very same items! And, as many now know, those dues often are not used properly and facilities fall into disrepair and neglect. Eventually, the topic arises: the need to increase the annual dues to cover “unexpected” (failing countries) costs for repairs (to prop up). The financial hits keep coming. But, rest assured, it’s all for the good of the increased and guaranteed protection of property values, right? Just how much value is provided when the surrounding infrastructure and amenities fall into disrepair? What happens when certain parts withing the union are not really contributing to the whole?

Now replace the term HOA with EU and convert the subjects of paint color, mailbox placement and landscape maintenance with such analogous discussion points as immigration law, border control and mandated value added taxes (“VAT”) on certain goods or services. The similarities are inescapable.

But we live in a free society with protections afforded to us by the Constitution, right? Tell that to the military veteran who wants to fly the American flag on a pole in his front yard as a demonstration of his First Amendment right to freedom of expression. Not so fast, señor! The HOA has the ability to trump the Constitution of the United States of America, just as the EU has slowly developed the same ability to force nations to cede their own sovereignty to a handful of bureaucrats in Brussels whose might and authority rivals the kings of old.

Last week, the UK had enough. They had been paying their dues (to the sum of close to £350 million pounds a week) and watched as their judiciary became subject to laws overriding their own rulings. Members of parliament were finding close to 60% of their discussions regarding self-governance had to be filtered through (or were started by) the governing body of the EU. Their ability to be unique, free and independent was slowly eroding and they came to the decision to end it. They were no longer interested in being tied to the onerous and pompous rules of an unregulated and dictatorial HOA. As much as the new elitist, professor-class in government wanted to keep them in the collective (where resistance is futile), the people understood there was far more to gain in being an independent and free United Kingdom, than to continue their subjugation under the yoke of the EU.

On a final note, the UK hasn’t gone bankrupt. The “company” has not been dissolved. The fact that world markets went tango-uniform for a couple of days is more of a reaction to those elitists who are committed to squashing individuality in favor of conformity, than to any real worry over the UK’s economy evaporating. The country is still there. Their economy is still there. And, like the homeowner who suddenly finds increased finances after the HOA is dissolved, they will begin to engage in free-trade around the world, without being controlled by someone else.

Understanding #Brexit is as easy as understanding how many feel about their HOA. Those who love to control others and the forced collection of wealth through fear are likely the ones bemoaning a free and independent United Kingdom. There will always be those who have created an existence at the expense of the pain and misery of others. This past Friday, the UK plucked those leeches from their body. As Boris Johnson, former mayor of London, stated to the press, “Today represents our independence day.”

Somebody queue up the Bill Pullman monologue from ID4. And pour a dram. Cheers and congratulations to our friend across the pond.

Actor - Writer - Director - Radio - Veteran | I like ‘guy’ things: women, sports, video games, dogs, drinking, football, shooting guns, war movies, action movies, sci-fi movies and playing the hero. I am a red-blooded, American male through-and-through. But, I have another side as well, a deep and entrenched creative side, which started with writing and evolved to include acting and radio. As a result, I have appeared in nearly 100 stage shows and been involved in dozens of motion pictures, including two independent features available on Amazon Prime. I have also been in broadcast radio for over 20 years. Thus far, I have been honored to receive five GAB Awards from the Georgia Association of Broadcasters: Two for Best On-Air Personality and three for Best Talk Show. It was only natural with these pursuits, podcasting would eventually be added to my plate. In late 2017, I decided to start a show with my buddy and co-host, Walt Murray, called, The Wilder Ride. We examine the films of Gene Wilder in the movies by minutes format. This has opened the door to meeting so many new and amazing podcasters from around the world and led to some amazing friendships! As Shakespeare puts it, “I am amazed and know not what to say!” Afterwards, my wife and I started a show called, 'The Marriage Fit Podcast" where we talk about our lives as a blended family. Our tag line is it's a show about trying to make things fit, staying fit, and not throwing a fit. Of all the roles I play, though, I want to point out that there are two I consider more important than any I have ever played (or will ever play) and that is being a DAD and HUSBAND. I have four girls, ages, 26, 24, 23, and 21 and there is nothing I won't do for them. And, none of life's ambitions would be possible without the strength and support of my best friend in the entire world, my wife, Susan. Regardless of anything else, nothing will ever outshine them. View all posts by Alan J. Sanders