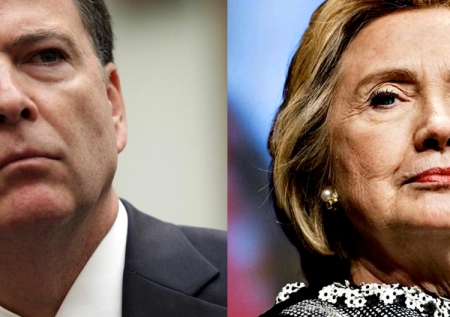 Earlier today, much of our collective breaths were held as FBI Director James Comey took to the microphones to discuss the finality of the investigation into then Secretary of State Hillary Clinton’s use of a private email server. One line stood out prominently in his opening comments: No one knows what I am about to say.

Let us examine the timeline from Tuesday of last week through to today’s press gathering. In a secret meeting, that was not supposed to be known, but was somehow accidentally discovered, the public found out Bill Clinton and Attorney General Loretta Lynch met on a runway in Phoenix, AZ for an impromptu discussion. The controversial liaison erupted in the media and online about the nature of that meeting, given the FBI investigation was ongoing and their recommendations would eventually land on Lynch’s desk. Why would the Attorney General of the United States put herself in a position of the appearance of impropriety by agreeing to a secret meeting with the husband of the woman who was being criminally investigated?

The initial response was, it was a “chance meeting” where they discussed the Clinton’s grandchildren, golfing and other non-official topics. Isn’t it odd, though, they had their security details stationed outside the plane and not on-board? No one was left within earshot of any of their conversation.

While we were all asking, “What did they really talk about?” the Justice Department was busy filing a brief to protect any and all emails that took place between the senior staff of the Secretary of State’s Office and the Clinton Family Foundation. All of those senior staff were under the direction of Hillary Clinton. Why did those emails need to be isolated and sealed for more than 27 months? (We still have to wait and see if the motion is granted.)

By Friday, three days after the meeting between Lynch and Clinton had been taking up all the oxygen in the room, the Attorney General, through a spokesperson at the DOJ, said she would accept whatever recommendations that were given to her by her senior prosecutors and the FBI, to include FBI Director James Comey. This gave rise to varying predictions from all the talking heads across every cable-news network. Some said Lynch met with Bill Clinton to let him know his wife was going to be indicted, but Lynch was going to insulate him and the Clinton Family Foundation through her action to block the release of those emails. Others saw the opposite, that Hillary was going to be safe, but only as it related to the private email server, and Lynch was trying to protect the family by sealing the emails between the Secretary of State’s Office and Clinton Family Foundation personnel. Regardless of the finding of the FBI investigation into her use of a private email server to conduct government business, the question still remains: why isolate those emails?

On Saturday, the FBI spent 3½ hours interviewing Hillary Clinton, an indication their case was moving toward completion. The meeting was said to have been voluntary on the part of Hillary Clinton, who met with several investigators at FBI headquarters in Washington, D.C. The talking heads were back throughout the weekend, concluding the FBI had all the information they needed and the interview was meant to see if she would contradict herself or their findings. Who knew we were less than 48 hours away from the big press release by the FBI Director himself?

Earlier today (Monday morning), the press reported Hillary Clinton would be flying with President Barack Obama on Air Force One to a campaign appearance in Charlotte, NC, where the President would help the presumptive democrat nominee in her bid for the presidency. Once bitter rivals during her former attempt to win the office, and many have suggested there is no love lost between the Clintons’ and the Obama’s, this projection of solidarity has been one of the strongest shown yet by the President toward Hillary Clinton.

Then, just a few hours after the announcement of Hillary Clinton and President Obama flying together to a rally, FBI Director James Comey takes the stage to tell us about the FBI’s investigation into her private email server and it’s outcome. At this point, having read this far, you likely know the FBI has determined that no reasonable prosecutor would bring charges against her. After spending more than 15 minutes explaining all of the rules and statutes she broke, detailing the missing emails they had to piece back together, the exhaustive search to rebuild whole conversation chains, the many emails that were classifed, some to the highest level possible at the time they were being sent/received (not just up-classified after-the-fact) and the likelihood hostile actors infiltrated her private email server, FBI Director James Comey came to his odd conclusion. “No reasonable prosecutor would bring charges.”

This can only lead to one of two conclusions:

There can be no other way to interpret the timeline of these events.

Let’s look at FBI Director James Comey’s statement that no one had any knowledge of the findings of the FBI investigation, nor the words he was about to say. If that’s the case, why did Attorney General risk the optic of being caught with Bill Clinton, less than one week before the FBI’s findings? If she knew there would be no recommendation for charges, it means James Comey is lying. If she didn’t know, it means Loretta Lynch was incompetent in her lack of basic judgment.

Similarly, President Obama publicly revealed he would attend the rally with Hillary Clinton just hours before Comey was set to read his statement. Why would the President put himself in the situation of being joined at the hip with a woman who was going to be indicted? Once again, it appears Comey must have been lying about no one knowing what he was going to say. Otherwise, it means the President was showing a lack of judgment by taking a major risk in being seen on Air Force One with someone about to be charged with felonious activities.

Finally, going back to Comey’s full statement — the overwhelming majority of which castigated Hillary Clinton and the Secretary of State’s Office with an intense tongue-lashing for their incompetence and gross-negligence in the protection of highly classified information and proper regard for national security — how can he let her off the hook by claiming there wasn’t enough evidence of an intent to break the law? He just spent a quarter of an hour detailing all of the evidence. Besides, how many times have we heard the phrase, ignorance of the law is no excuse?

Are we really going to accept that a former First Lady, a former US Senator from the state of NY and a former Secretary of State had no ability to understand the importance of protecting our national secrets? Are we to allow the smartest woman in the room to use the “whoopsie” defense? Is FBI Director James Comey letting Hillary Clinton off simply because she looked at him and said, “My bad”? What does this say about the confidence in the FBI’s ability to do their job?

Either Hillary Clinton is one of the most incompetent, ignorant, grossly negligent and disqualified person to ever be considered for any state office, let alone the Presidency of the United States, or she has been willfully deceitful, flouting the law and demonstrating her unworthiness to be President. Regardless of political affiliation, painting Hillary Clinton in either light leads to the same conclusion — she is unfit to be the Commander in Chief.

She is either grossly negligent or she is willfully deceitful. Or maybe she is just too big to jail.