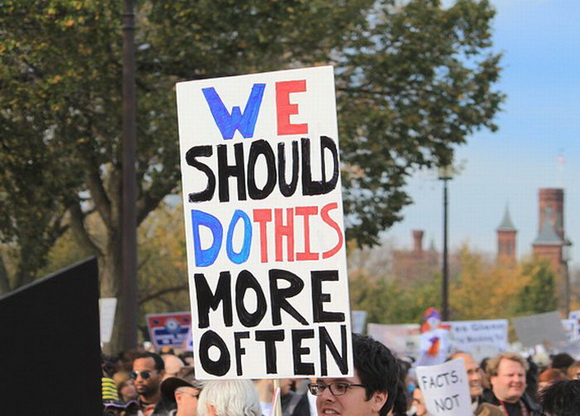 It’s just now coming up on 13 days; not yet two full weeks since the inauguration. I believe there have been protests, rallies and protest-rallies each and every day, with no sign of slowing. There is a subset of our country that seems to have decided it’s better (easier?) to stop going to work, ignore responsibilities to house and home and become a career protester.

I am writing this specifically for my friends on the Left. I’m worried about you. There is a problem when you continuously dilute your agenda by deciding everything must be protested. You could eventually succumb to the psychological condition known as compassion fatigue. As defined, compassion fatigue is a condition identified by a gradual lessening of compassion over time. It is common among individuals who deal with heightened emotions. From soldiers in combat, to first-responders, to doctors in emergency rooms and more, when exposed to intense situations over and over, eventually, as a way to cope, you will begin to stop caring. Similar to the boy-who-cried-wolf scenario, at some point, no one will care about what you have to say.

In addition to the gradual loss of apathy for the interest or cause, there are other problems that may manifest themselves. Some side effects of compassion fatigue include feelings of hopelessness, losing the ability to experience joy, a loss of a sense of humor, constant stress and anxiety, sleeplessness and a shift toward negativity.

Some say the voices of the regressive-Left are already experiencing these symptoms today. Many have already lost their sense of humor. Everything is mind-numbingly serious. There are those intent on looking for micro-aggressions everywhere, while demanding safe-spaces in which to hide. Some see misogyny, bigotry and xenophobia all around. Even last night on the campus of Berkeley, riots broke out because the tolerant voices of the Left would not tolerate to have Milo Yiannopoulos as a guest speaker. Why? Because he is not lock-step in line with the groupthink of the Left. The constant genuflections within the church of political correctness is leading toward a mass psychosis.

Let’s pull back and I’ll try to explain this in a different way. We’ve all had relationships go bad. Whether dumped or divorced, we all know what it feels like to be emotionally hurt by someone we loved. However, over time, most will put that chapter behind us and move on to new adventures. That’s the healthy path. But, occasionally, the bitterness of the breakup will drive some to obsess over their ex, wondering nonstop who they are with or what they are doing? They complain incessantly about what they’ve learned, their words dripping with revulsion and anger. It becomes uncomfortable when they are out in groups. They cannot allow themselves to be happy because of their obsession over the one who hurt them and, by way of extension, like the Dementors of Harry Potter, can suck the joy out of everyone else in the room.

Let me ask you, in that situation, who is actually hurting? Who is really suffering? Is the ex somehow affected by the vitriol of their former love? Or is it the one who cannot figure out how to look for some semblance of acceptance and peace?

This is what’s happening to a segment of the population since the election of Donald Trump. Many are acting like the jilted lover and now that they have been left behind, they are focusing their hurt and anger on the one they believe scorned them. They are trolling nonstop, looking to criticize every word, phrase or action, regardless of facts, logic or reason. They prefer to make themselves feel better by hurting others, while spreading lies, misinformation and partisan rhetoric.

You cannot remove darkness with more darkness. You cannot remove anger by getting angrier. Said another way, by the great civil right’s leader, Dr. Martin Luther King, Jr., “Darkness cannot drive out darkness; only light can do that. Hate cannot drive out hate; only love can do that.” It’s not easy to do, but, as with most things, it has to begin with you. No one else can do it for you.

This is not to say you must roll over and accept everything. On the contrary, the framers of our Constitution were keen to protect the right of citizens to gather and speak openly. However, if you have set yourself up that when the President says the sky is blue, you cross your arms, stamp your feet and shake your head, are you really accomplishing anything? To willfully disagree with everything means you are no longer protesting — you are throwing a tantrum. And, as most toddlers learn, throwing a tantrum uses a lot of energy and rarely achieves anything other than dreary fatigue. It is more productive and healthier to learn to pick your battles and pay heed to the old adage, you are likely to attract more flies with honey than with vinegar.

2 thoughts on “Will protest fatigue begin to show?”