This picture was taken a few years ago when my wife and I took our girls on a family cruise and made an excursion into the jungles of Belize. I love it because it really does represent our lives. We are fun, adventurous, willing to explore, outdoor lovers and, most importantly, a family. As you can see, I’m surrounded by women. They are my everything. There is no role I have ever played that can compare to being a father and a husband.

And, I know a little something about playing roles. I discovered theatre and performance early in college. The theatre bug bit me hard and I’ve spent my life, thus far, performing whenever I have a chance. I have played nearly 100 roles to-date, on stage, in video and on film. I’ve shot commercials and industrials. I’ve done voice-overs and have been involved with 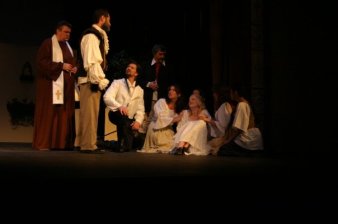 broadcast radio for almost 18 years. I’ve directed dozens of shows and am most proud of bringing several Shakespeare productions to life, including Romeo & Juliet, Macbeth, A Midsummer Night’s Dream, Twelfth Night and Much Ado About Nothing. I learned sword choreography and have since gone on to choreograph major sword battles for stage and in a full-length independent feature film called The Neon Dead. 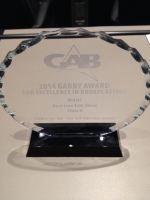 n radio, I have received the Georgia Association of Broadcasters (“GAB”) awards for Best Show and Best On-Air Personality. I am on-air every morning with drive-to-work radio as the host of Bartow’s Morning News on AM 1450 and FM100.3 WBHF. Additionally, I host my own talk show every Saturday from 7AM-10AM, called Waking Up with Alan. I am also a fill-in host for News 95.5 and AM750 WSB in Atlanta, most readily heard during Atlanta’s Evening News covering for Erick Erickson and the Herman Cain Show.

I also need to take a moment to give a shout out to the men and women serving in our armed services. After completing my first year of college, I realized it was going to be a little more costly. At the time, we were in the midst of Desert Shield in Iraq. I enlisted in the Navy under the Sea/Air Mariner program (“SAM”) and trained to be a part of the intelligence community as a cryptologist. While in my active duty service, Desert Shield turned into Desert Storm. I became a veteran at that point. Now, I am not saying this as a pat on my own back. I simply did what was asked of me, learned my trade and never had to ship out. I only mention  my military background as a way of rounding out my background and to reveal my unwavering support for all who have served, are serving or will serve. Thank you!

After graduating from college, I eventually landed with Big Blue! From the mid-90’s to 2007, I worked for IBM, starting off in content acquisition, moving into IT support, eventually managing the IT support of eight e-Business Centers of Innovation. I then moved to a different area that allowed me to work from home until late 2007 when being an IT Project Manager wasn’t really worth a whole lot during the economic downturn leading into the 2008 election cycle. After a handful of contractor

jobs, my wife convinced me in 2010 to start my own website development and video production company – AJS Productions. The hours are long and the money hasn’t matched what I used to make, but I’m exceptionally happy and that goes a long way.

In my spare time, I work on five different non-profit boards in Bartow County:

At home, we currently have six dogs. Whenever I say that out loud (or write it) I find myself thinking, holy crap! That’s a lot of dogs! But, in all honesty, they are so easy and mild-mannered, for the most part, you wouldn’t know we had that many. One is less than 15 pounds, one is closer to 25 pounds, two are between 35-50 and two are in the 80+ range. All but one have been rescued. We have often said if we ever won the lottery, we would find a way to own a large enough piece of property to rescue so many more. Our smallest, Lola, is a Miniature-Pinscher. Our newest member of the family is a Husky/German Shepherd mix who just turned one on October 21, 2017. The second newest member of our family is an Italian Greyhound-Rat Terrier mix who was adopted in October of 2016. Then comes our Chow-Pekingese, Khalua. One of our “big boys” is our Yellow Lab, Riley. Finally, we have Rufus, our Lab-Border Collie mix, the other big one.

We lost my original snow-dog, Maya, this past year after she fell ill at the age of 15. We lost Rudy, our Pug-Chihuahua mix (our Pughuahua?) in the spring of 2016 from a blood auto-immune disease at the age of four. We also lost my pure Alaskan Malamute, Sierra, in the early winter of 2014. It sucks to lose these four-legged members of our family, but we know we gave them an extension on life by choosing to rescue them from the local humane society. Please, if you are looking for a forever fur-baby, check your local shelter, humane society or rescue organization.

As I conclude, I look back to all of the facets of my past that make me who I am and it’s hard to think I can fit easily into someone else’s box. Whenever a snarky Leftist tries to paint me with the wide brushstrokes of being a racist, sexist, bigoted, homophobe, who doesn’t care about the air, water, environment or animals, I laugh. It’s such an easy attack because it takes no thinking to brandish those emotionally charged labels. When anyone looks at my background, it should be obvious that having a love of the Constitution and a reverence for the will of our Founding Fathers doesn’t mean two-dimensional labels of the Left apply.

That’s why Eric and I started this site. We wanted to promote the conversation. We wanted people to discard their preconceived notions and come to the table with a willingness to listen to other points of view.  Most importantly, we want to educate. And share an adult beverage in the process.